FSU students have designed a variety of blueprints to design their careers when engaging in the Animation & Digital Arts major. There are some commonalities with career design blueprints, which are the foundation building blocks of Self-Knowledge and Options Knowledge. Whether you are just beginning to design your career or updating your design, the information, tools, and materials below will provide you with a solid foundation to design your career.

To help you explore, here are interests, values, and skills commonly associated with common career fields related to Animation & Digital Arts. This list is not exhaustive yet gives you a starting point for your Career Design.

Learn More about You

The Career Center provides assessments that can help you explore and identify your interests, values, and skills. Utilize the Computer Assisted Career Guidance Systems and virtual values activity to see how your interest, values, and skills match those that are closely correlated with this major and compare occupation options that develop from your assessment results to those found in this blueprint.

Access valid and reliable occupation information through the resources below and compare the occupations you explore to your self-knowledge.

Salary Range Based on Sample Occupations

Explore the FSU Community to Find Opportunities that Match You

Explore the FSU Community to Find Opportunities that Match You

Connect with The Career Center

Drop-in to Career Advising with the Career Center and meet with a Career Advisor to explore and build your Individual Action Plan.

Connect with your Career Liaison who specializes in supporting students in this major and related industries.

Diversity and Inclusion in Cinematic Entertainment

Union Productions/ Club Down Under

Depending on your long-term goals, graduate school might be part of you career design. Utilize these resources using the keyword "Animation & Digital Arts" to research your options.

Each year the Career Center hosts career, internship and graduate school fairs to help students connect with employers. These events and more can be found in NoleNetwork, the centralized job board and connection to career events and opportunities at FSU.

Engage with the people and opportunities to learn more about yourself and career options. Career Advisors, Career Liaisons, Alumni, ProfessioNole Mentors, employers and other people you meet through involvement on and off campus will help you refine your career design.

After finding a Registered Student Organization to engage with, engage with Career Center and FSU Campus events and Programs to help you connect and build your network while also developing ProfessioNole Competencies.

Connect with professionals and FSU Alumni who are in careers that you want to learn more about or tryout a career to see how it matches your interest, values, and skills.

At FSU there is a program for everyone. Engage with one of the many programs that will help you develop, academically, personally, socially, and help you design your career.

Build Your Skills and Earn Badges

Earn badges and develop your ProfessioNole Competencies. From Financial Success options to learning how to build an App, there is a badging pathway for you. Pathways allow you to enhance your skills while working autonomously and alongside your peers, industry experts, and other ProfessioNoles. While you are earning badges, be sure to engage in ProfessioNole Ready so you are prepared to seek new experiences that will help you in your career design.

As you design your career, the Career Center can help you prepare to connect with employers and graduate and professional school programs through services, programs, and events.

FSU is here to help you build your network. However, you can also get engaged with opportunities and groups outside of the FSU community by getting involved with professional associations and engaging in or following groups on LinkedIn

American Women in Radio and Television

Alliance of Theatrical Stage Employees & Moving Picture Technicians of the U.S. and Canada

To search for LinkedIn Groups you can use the names of the associations above in the linked in search box and set your filter to groups or companies. You can then generate a list of LinkedIn Groups to explore and join or connect. Additionally, try some of the following keywords:

Experiences like internships, leadership, research, creative works and global engagement, also known as experiential learning or formative experience, are a key part of determining your interests, values, and skills and developing competencies for career success. Experiential learning provides the opportunity to apply the knowledge you have gained in the classroom to a real-world experience while enhancing your transferrable and industry specific skills. By engaging in these types of experiences, you can “try on” the various work environments within your aspirational career field.

Many FSU Students engage in experiences throughout the year, however it is important to know when application deadlines occur and that majority of employer recruit heavily in the Fall semester to hire interns for the upcoming summer. Below are some sample of possible experiences related to this major.

Honors in the Major

The Center for Leadership & Social Change

FSU provides or connects students with experiences every day. For internships, the Career Center's NoleNetwork connects students to internship opportunities on campus, across the country, and even globally. The Career Center's "Gain Experience" webpage also connects you with opportunities and other FSU departments. Other departments and programs on campus can also help connect with an experience that matches your career design.

Get recognized for your experiences. Whether it is one experience or a combination of various types of experiences that you engage in and complete during your time at FSU, there is a recognition program for you. Check out the Experience Recognition Program options through the FSU Career Center and the Garnet and Gold Scholar Society, which is the highest experience recognition and honor offered at FSU. 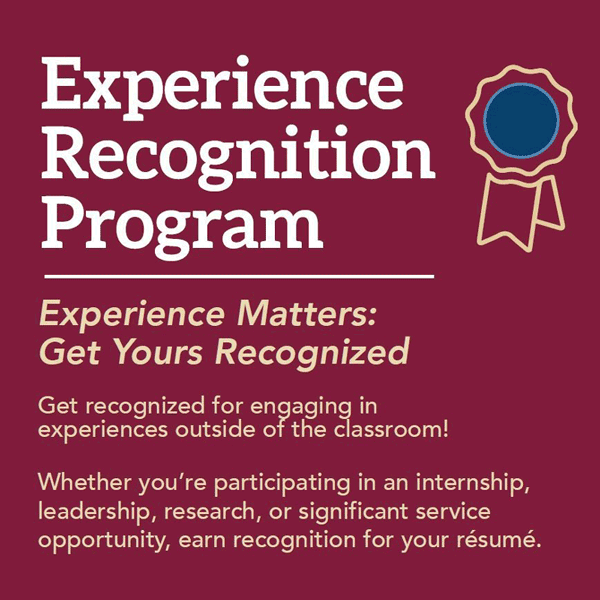 Now that you have the tools and basic concepts to being building your career. Start designing your custom blueprint.

As you design your career and build your blueprint create overarching goals with smaller smart goals that create the building blocks of your blueprint. Revisit and revise your plan as you meet your goals. If you get stuck, visit the FSU Career Center.